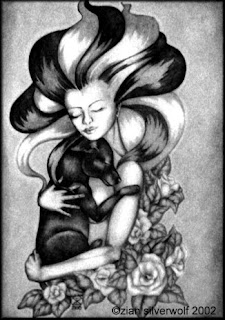 Those on my FB pages will already know that my little girl had something of an injury in recent days; somehow, she hurt her paw/leg while hunting in the garden. It's been getting better with time and a lot of love, but talk about a metaphor for dealing with impatience, and wanting everything immediately -
Just as it was getting better, she decided that she could run about the place again, and now she's aggravated the injured leg and has set herself back again. Granted, we're talking about a dog here, a very intelligent dog, but a dog nevertheless. (Mind you, I've seen her out-think certain humans....*grin*).

What is it about the need for immediate gratification? Why is there such an emphasis on hurrry-up-and-have-everything-at-once, when life is so short, and we're supposed to stop and smell the flowers, and savour the moment, and appreciate life? People gulp down their food like they'll never eat again, in such enormous amounts, like they're saving up for some kind of famine....they rush through their day to hurry up and go sit on the couch.....They push forward at the checkout as if somehow, two extra inches forward into someone else's personal space will stop the register from running away..... There's this possession of fear and anxiety about missing out, being forgotten, that has nothing to do with fighting another animal for food or a warm cave, or even for the defence of the family, and yet it does. That particular biological fear has, in affluent countries, become somewhat redundant, and so it's being redirected to things like the 'right' car, the 'right' dvd player, the 'right' stuff and social station.
I watch people fight for acknowledgement, recognition in society....apparently they've done something to save the world, but they can't tell anyone what it is, they just want recognition for how deeply important and special they are, more than anyone else - I've never seen a sportscar save the world, but I'm young, I haven't seen everything. However, the new social trend to agonize over success and achievement and lifestyle seems to be paralyzing people into a new state of persistent impatience. I know that the world has always known fear - there's always something in the works that's going to blow us all to kingdom come, be it bows and arrows, the black plague, steel swords, little pieces of metal fired out of an iron pipe, or that new-fangled terror called the tank...People lose their minds over what they face, how they are dispossessed, in times of real trouble. Now they lose their minds over not having the right app for their iPhone, or not having a girlfriend that's re-programmable, or not being able to order a meal at a restaurant and have the right to totally re-design it.

Humanity's backbone has always been in the spirit of adventure; now it's a case of being so comfortable that a small red light blinking can destroy someone's blood pressure, that people can now find new heights of self-abuse and destruction through the indulgence of luxury and convenience - fast food, fast relationships, fast and faster cars, computers, phones, music players, and suddenly 30 seconds seems like a really really long time.
People treat each other like computers - hey, I pushed the button, why haven't you done what I wanted you to do? Better re-write your whole personality so you'll do what I want until I need the upgrade......??????

I took a month off work to discover what my bitch with humanity is. People around me crumble at the merest sign of confrontation, they take refuge in the absurd, they concern themselves with their fragility instead of working towards strengthening and support - they want everything now so that they can consume more, hoard more, and give less and less and less, leaning towards a mean-spirited state of being, where the ultimate status is one of sheer narcisscism - "What About Me?"
The mountains have been climbed, the oceans crossed, the moon walked on, yet we are still to bring water to the desert, feed the many and house the needy- and you're upset because I didn't write something you wanted to read. I didn't draw something you wanted to see. I didn't suddenly go 'bing' and provide you with the ultimate in state of the art, and then turn around and give you your entire agenda for the week while forecasting the weather. Sorry about that, I'll just nip off to the nearest human technician and get that new app installed shall I? And while I'm at it, I don't like the construction of your nose, so we'd better book you in for facial reconstruction so that you have an appearance that is acceptable to me, yes?

Cynical? Yes. Jaded? Could be. Older? Definitely. Hitting that age where I can look upon the world and remember how cool it was to wear neon socks and white shoes with a ra-ra skirt, and if it wasn't a Sony, it wasn't a Walkman. Going swimming with sharks, and canoeing in croc-infested waters, when the real hiking trails didn't have ropes and signs, when 'going camping' meant a sheet of plastic and a sleeping bag, when life was to be lived, not sanitized. I now face the generation gap, and I've been facing it with disdain, dismay and deep regret that Peter Garret gave up music and took on politics, that art no longer requires skill or quality, that a bag of jellybabies is the worst thing you can give a child,  that historians have yet to take over the world and remind people the mistakes that were made last time, that the Dalai Lama has a Twitter site, and there's no need to make pilgrimage to the sacred places on earth, because there's a live feed set up somewhere and you won't be deprived of your potato chips or your recliner with built-in massager. Don't start with the business of people who couldn't have that kind of access before - there are pensioners living in the dark in Australia because they can't afford the electricity bill, yet the Aussie government is handing out set top boxes and tvs so that everyone can have digital reception.

My conclusion? I can't save the world, not even one person at a time. I won't be saddled with the fear of the masses who believe that the sky is falling and fall prey to their insatiable appetites for champagne when they can't even share a loaf of bread with someone. I won't break my back over carrying the emotional grievances for people who have never known hunger, never lived in fear for their lives, never been beaten, never been lost in the dark. I'm not god. Gods are slaves. I'll do for others what they can't do for themselves - I shall live, and be grateful for what I have. With my dog.
At least her impatience is about real things like food and tummy rubs.....
art fantasy

When I went full time as a working artist back in 2001, the focus of the work was the paradox - the contradiction that is the mortal coil seeking definition in the divine. Spirit and science, heaven and earth, body and soul, myth and reality - all the ways humans explore their own condition.

The questions inhabiting such exploration were answered when it came to the presence, or rather, the desire for perfection. Because perfection is an ideological  construct of momentary satisfaction, which passes as the observer becomes sated, bored or otherwise aware of the imperfections that are naturally present, leading to limitations of said perfection.

Thus the desire for perfection changes definition as the observer's state changed - and this is why the contradictions exist. As beauty is in the eye of the beholder, so too could it be said of the state of perfection. The changes in perception created either by resolution, conclusion or satiation, inform the lack of an…

Mortal Wounds.
Graphite on A3 paper, another finished work for 2018. I think of our life experiences in a manner of layers - not all are wounds and scars, and we have the option to make life a lesson, a challenge, a mountain or a molehill - we're creative enough to be taught how to perceive life, and sentient enough to be taught again and again. We're also curious enough to recreate ourselves to adapt and survive the inevitable changes that are part of life's journey - in the metaphor, these would be extensions of ourselves, rather than changes to the core identity.
And extending ourselves is totally human.